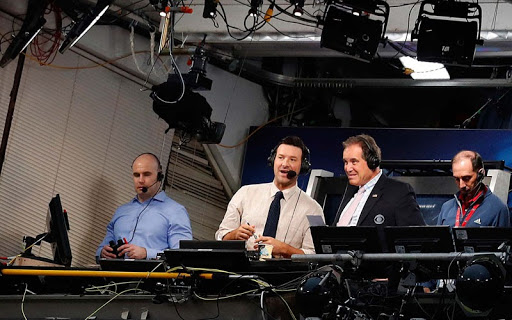 Sources claim that ESPN is preparing to make a multi-year deal for Tony Romo. If signed, the former Dallas Quarterback’s $4 million annual income could balloon to a whopping $10 to $14 million a year, that’s according to Front Office Sports’ Michael McCarthy.

Initially, the plan is to include Romo as an analyst on “Monday Night Football” and other high-profile NFL slot which the company owns.

Sources also added that in another round of TV negotiations for 2020-2021, there are talks to place Romo as a possible host for ESPN’s NFL game coverage, especially if Disney could snag the Sunday afternoon game package from Fox Sports, NBC Sports, and CBS Sports.

Romo’s broadcasting career began in 2017, when CBS Sports chief Sean McManus and David Berson, introducing him as the number one game analyst over veteran Phil Simms. McManus and Berson’s gamble paid off as Romo was able to establish himself as one of NFL’s analysts.

Currently, Romo is on his last year for his three year deal with rival CBS sports.

This deal could eventually shake up the sports industry, as it can dictate the payscale for top TV sports personalities. In his column for Forbes, journalist Alex Reimer points out that despite the increase in viewership, ESPN needs a better sportscaster, which is why the company decided to strike a deal with it. “[Romo] is already widely considered the best sports analyst on TV. His Nostradamus qualities and unbridled enthusiasm make him an excellent listen” Reimer stated in his blog post.

However, despite the seemingly generous offer from ESPN, some analysts claimed that it would be best for Romo to stay with his current media channel. Phil Rosenthal from the Chicago Tribune argues that there are better Sportscasters than Romo who deserves to take home the big paycheck.

“Romo is informative, incisive and fun to watch, but he’s no John Madden — not yet anyway. Three years into his broadcast career, there’s no way to know how his work will play over time” Rosenthal wrote.

Reimer also added that the former quarterback will be making a big mistake since CBS has better high-profile gigs and offers a more secure slot. “CBS will always boast a marquee slate. Barring unforeseen circumstances, moving from CBS to ESPN would mean calling worse games for fewer people” Reimer explained.

Other analysts also argue that Romo’s unparalleled chemistry with Jim Nantz will be hard to beat. In fact, even Nantz acknowledges that “We had a chemistry and a bond going into this thing that was helpful.”

During his time as a Sportscaster, Romo was also able to land other campaigns from  Corona, Skechers, and Chaps by Ralph Lauren

Want to know who are the highest-paid sportscaster in history? Here’s the list that Romo belongs to

As of the moment, there are still no official statements from ESPN and Romo.